Midwest Farm Mom of 2011 is much more 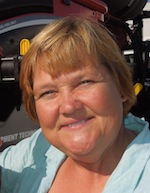 April Hemmes loves to talk. And the more she reveals about herself and her family, the more the listener wants to know. She was the 2011 Midwest Farm Mom of the Year, the result of promotion conducted by Monsanto. April does much of the ‘mom’ things that are common in an active farm family, but she juggles that with the farming of 1,000 acres of Franklin County, Iowa corn and soybean ground.

“My husband has the real job in town,” she says. Entering farming in the middle of the 80s farm crisis, Hemmes knows challenges, but she strives to be like her grandfather who “combined corn at 100 and planted beans at 100.” He died at the age of 101. Her father, she says still helps on the farm.

She knew from an early age that farming was for her. “There was, I think, five percent women in animal science at Iowa State when I was there from ’78 to ’82,” she explained. Upon graduation, she worked a few years for a lawmaker in Washington, D.C., and has been on the farm since leaving that position.