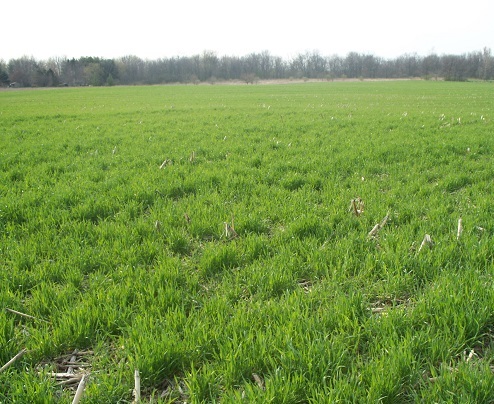 Research at the University of Wisconsin is showing just how well cover crops can control problem weeds including waterhemp.

Jose Nunes is an undergraduate researcher with the University of Wisconsin weed science program.  He tells Brownfield the ongoing research looks favorable for limiting weed growth. “We’re learning that the cereal rye can suppress waterhemp quite well if you produce enough biomass in the spring before terminating that cover crop.”

Nunes says most of the time, they’re planting into green cereal rye and coming back later to terminate the rye.  He says a good amount of biomass from the rye helps control weed growth, but there is such a thing as too much biomass. “If you let the rye grow too much, you’re going to have too much biomass and too much (residue) as it’s really hard to plant through that high-biomass scenario, especially if it’s dry. Then, you might have some stand loss which might translate into yield reduction at the end of the season.”

Nunes says the cover crop biomass also allows the planted crop to outcompete the weeds for space and sunshine, further limiting weed growth and seed development.  He recommends farmers new to the practice start on one or two field areas known to have a weed problem, learn from those plots, and expand the practice later.