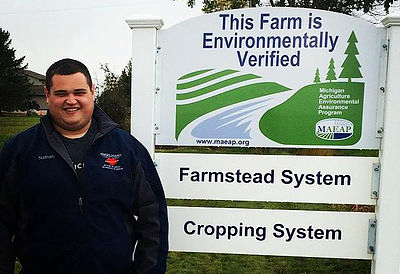 A young farmer says transitioning to organic grain production allowed him to buy his own farm.

Nathan Engelhard farms 1,000 acres of organic corn, soybeans and wheat with his family in Michigan’s Thumb. He tells Brownfield the farm transitioned to organic in 2002 on just 80 acres.  “Organic gave us the opportunity to help build our farm a little bit. My dad was in control of it at that time.  I bought my first farm in 2009 and the organic just gave me the ability to borrow the money and get started on my own.”

He says planting wrapped up close to normal about a week and a half ago and they’ll be focusing on weed management through at least August.  “Being organic, we can’t use any herbicides or insecticides so we have to use all mechanical techniques to take care of our weeds.” Engelhard says during the growing season he’ll make at least five trips over fields to manage weeds and hand pulls them at the end of the season.

He says after farming organically for 15 years, yields are now comparable to conventional crops and they’re receiving two to three times more for them.