Now that the Farm Bill has been signed 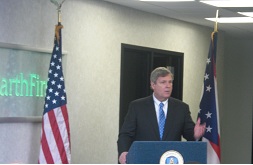 Now that the Farm Bill has been signed, it’s up to the United States Department of Agriculture (USDA) to implement the programs.

To do that, Agriculture Secretary Vilsack says teams for each Farm Bill title have been put in place.

“We’ve asked those teams to identify the rules, regulations and guidelines that have to be adopted because of new or different modifications to existing programs,” said Vilsack.

The Secretary says another group will be responsible for prioritizing what needs to be done first.

“For example, it’s fairly obvious to me that we have to have the disaster assistance for livestock operators restored as quickly as possible because these folks have been waiting for a couple of years,” the Secretary said. “There’s a new dairy program, there’s obviously a revenue protection program, there are slight changes to crop insurance, and those things are obviously priorities.”

Where it has the potential to be slowed down is that all of these rules and regulations have to be reviewed by USDA lawyers and budget staff. The Secretary hopes the steps they’ve taken will keep the process moving as effectively and efficiently as possible.