Denying biotechnology is a moral argument 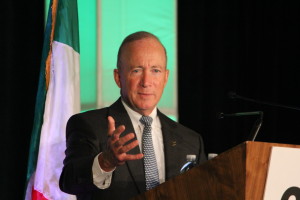 As Purdue President Mitch Daniels addressed the American Seed Trade Association this morning his focus turned to biotechnology. ”Science is in favor of biotech. But we need to make it a moral argument and we need to take it outside this room,” he says.  “It’s bogus for people to try and alarm consumers about fictional difficulties with biotechnology. The fight against biotechnology is anti-poor. We have arguments for labeling products. Well I have one for GMOs. Being Anti-GMO should be labeled as heartless, cruel, and frankly immoral.”

He says it is his hope that those currently opposed to the use of biotechnology without scientific validity will eventually change their minds.  “I hope they will rethink their opposition and support thoughtful, careful use of these technologies,” he says. “It is our only hope in feeding a world of 9 billion people.”

Daniels admittedly was part of a pro-agriculture administration as Governor of Indiana and he says that continues in his Presidency at Purdue University.  “What more noble careers could our students pursue than to press out the knowledge of agriculture,” he says.  “In a world that is headed to 9 billion and many of them hungry, to be able to provide them with better food and better nutrition.”