Invest An Acre helps the communities of those who contribute 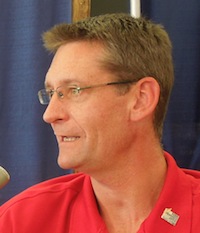 The Howard G. Buffett Foundation, Feeding America, ADM and Monsanto have partnered to launch Invest an Acre. They’re encouraging farmers across the country to donate one acre or more of crop proceeds to help fight hunger in their own communities. “That’s distributed directly and 100 percent into the community that the farmer gave it from,” said Ian Pinner, who is with ADM, during an interview with Brownfield Ag News at the Farm Progress Show. The Howard G. Buffett Foundation is covering all of the administration costs, according to Pinner, which makes it possible that the entire donation amount benefits those who need it.

Because the program is based on proceeds from what’s raised on an acre of land, the drought affects the size of the donations, but Pinner is not concerned.

“The Invest An Acre program is not a short-term program, so whilst we might not get the donations this year that might have done if we didn’t have the drought, I think over time it’s going to gain more traction,” said Pinner.