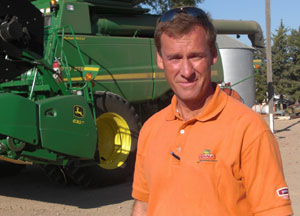 Blaine Schmidt is a territory manager for Monsanto in eastern Nebraska.  We met Blaine on a beautiful early October morning at the Norm Kavan farm near Cedar Bluffs, Nebraska.  We talked about the progression of the soybean and corn harvest, the performance of Monsanto’s trait products and what growers should be thinking about for 2011.