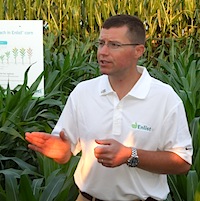 The Enlist Weed Control System promises robust tolerance to Enlist Duo, which is a proprietary blend of glyphosate and a new 2,4-D product.

“A lot of the glyphosate-resistant weed species that growers are having a problem with are broadleaves,” said Damon Palmer, the U.S. commercial leader for the Enlist Weed Control System from Dow AgroSciences, “so as you add this new 2,4-D choline into the Enlist Duo, it’s going to provide another tool in the toolbox from a mode of action standpoint over the top to control these troublesome weeds.”