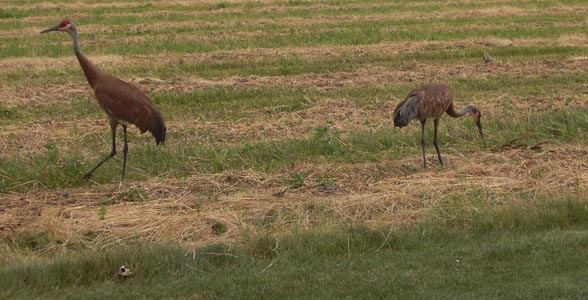 A wildlife group is hoping to help farmers get some reimbursement for crop damage by sandhill cranes.

Roger Schnitzler with the Crane Foundation says the birds have adapted to modern agriculture and have greatly increased in numbers. “They’ve greatly increased from maybe ten in the whole state in the 1940s to maybe 100-thousand cranes in Wisconsin and maybe another 50-70 thousand in our sister state across the lake in Michigan.”

And, he says the large number of cranes is often devastating on newly-planted corn. “As it starts to germinate, the starches start to change and it makes them very digestible for the cranes to eat, and they have become a serious problem for many corn growers here in this state and Michigan, and somewhat in the State of Minnesota.”

As flyover states, Schnitzler says the cranes stay here and raise their young, leading to increased yield losses of up to 10%.

Schnitzler says the Crane Foundation is trying to find ways to work with farmers and farm organizations to solve the problem, but he says a hunting season is not the answer. “We believe that’s a false flag. I don’t think a hunting season is going to accomplish much. The Fish and Wildlife Service will not allow a hunting season during the spring during the breeding season, and that’s when the corn growers need them.”

And, he says a fall hunt would thin the population somewhat but won’t solve the problem.

For now, Schnitzler says the foundation is trying to convince the Wisconsin legislature to help mitigate the cost of crane damage to crops.  He says farmers can use Avipel to repel cranes, but it can cost from eight to eighteen dollars per acre, discouraging its use.