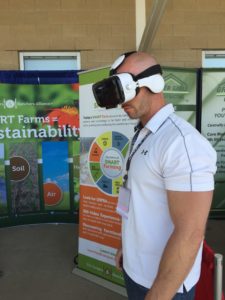 Talking to Brownfield at the World Pork Expo in Des Moines, communications specialist Paul Spooner says farmers are interested to see if USFRA’s outreach efforts are moving the needle.

“Through our consumer perception research (we) found about half of food influencers associate increased yields and increased efficiencies with technology.  So this really was the impetus for Smart Farm.  We want to capitalize on that positive support for technology.”

USFRA has developed a “360 virtual experience” that takes viewers to the farm.

“It’s an opportunity for them to see the technology that we’re using.  That we’re able to automate temperature and feed, (which) increases efficiency and (provides) better comfort and care for the animals.”

Spooner tells Brownfield most consumers are pleasantly surprised by the conditions hogs are raised in.

he says producers react with gratitude after watching the video.