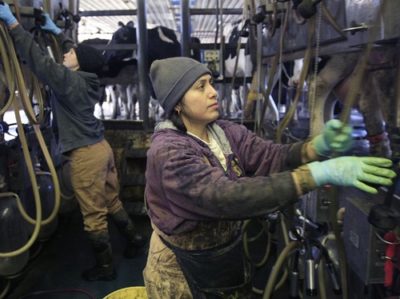 A new immigrant labor bill is being prepared in Congress.  Laurie Fischer with the American Dairy Coalition tells Brownfield she is working with House Judiciary Committee Chairman and former Ag Committee Chair Bob Goodlatte (R-Va) to support the bill.  “We still are finishing up the completion of the language, but it will allow undocumented workers currently here to participate as well as allow new workers to come into the country as needed.”

Fischer says the Goodlatte bill will be a lot less cumbersome than working with the present H2-A visa program, which doesn’t meet the year-round needs of the dairy industry.  She is optimistic the new immigrant labor bill will be introduced in a few weeks.

She says delays are possible because of the busy legislative schedule.  “The legislative calendar is being booked with healthcare and infrastructure, and tax reform.  Trying to find time for us to get these bills introduced is something else we’re working very, very hard on.”

A 2009 study by the National Milk Producers Federation and the Center for North American Studies found 62% of U.S. milk was produced by farms employing immigrant labor.