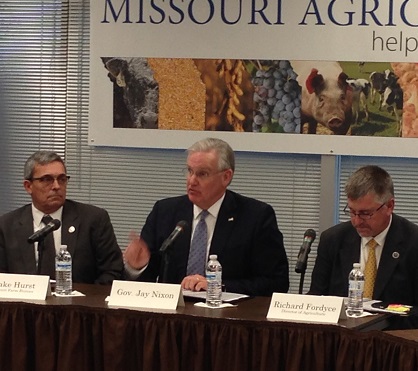 Missouri Governor Jay Nixon is taking Missouri commodity group leaders with him to Cuba for a trade trip in early March. Members of the U.S. Agriculture Coalition for Cuba (USACC) representing national ag groups will also be on the trip.

Nixon tells Brownfield Ag News that ag products will be the leader in exports from Missouri to Cuba as trade relations are eased, “Soybeans and corn have really solid potential there – we also think rice. I mean, the Bootheel in Missouri is continuing to be more and more productive on the rice front with the water they have and the capacity with it down there.”

With the Mississippi River as the gateway – Nixon says Missouri and other ag states are perfectly positioned for the Cuban market. But other countries have moved faster than the U.S.  He says, “We’ve seen Brazil move in over the last five or six years and, quite frankly, I’ve a lot more confidence that our Missouri farmers can produce on-time, high quality products. That’s one reason why we think it’s a significant advantage for them to buy it from us but, clearly, they’re buying rice from outside their country.”

Nixon concedes there is more work to be done on fully opening trade with Cuba.  Although trade is happening, he says, it’s been very difficult because of currency and payment issues. However, “I’m confident our federal partners are going to work that out. We think the relationship side is very important to begin to open up these markets and that’s what the trip in March is all about.”

The Missouri trade trip is scheduled for the first week of March. Nixon is holding a round table discussion about trade with Cuba with commodity leaders at Missouri Farm Bureau headquarters this afternoon.