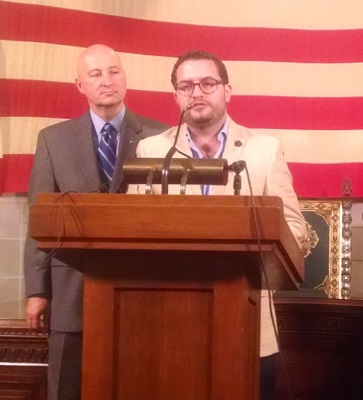 Felipe Basarte with the Mexican grain trade group Conafab responds to a question during a news conference in Lincoln. Nebraska Governor Pete Ricketts looks on.

A team of Mexican grain industry officials is in the U.S. this week to discuss trade between the two countries.

During a Tuesday news conference in Lincoln, Nebraska, Felipe Basarte with the Mexican grain trade group Conafab said they like doing business with the U.S. But because of the controversy surrounding NAFTA, Basarte says, they are also considering other options.

“Last week, some of our associated companions were down to Brazil,” Basarte said. “Mexico’s government is looking forward to make easier ways to import from Brazil. But also they don’t have the actual infrastructure needed and logistics won’t be as easy as from the States.”

Tom Sleight, president and CEO of the U.S. Grains Council, said the biggest challenge with NAFTA right now is, in his words, “to get with it”—to start the discussions and end the uncertainty on all sides.

Sleight and Basarte agree that major changes to the agriculture portion of NAFTA are not necessary.

“We know NAFTA needs to be modernized, but not in the agricultural part,” said Basarte.