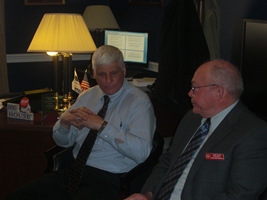 After meeting with a group of Ohio Farm Bureau County Presidents in his office on Wednesday, 18th District Congressman Bob Gibbs told Brownfield he credits his involvement with the Ohio Farm Bureau for giving him the confidence to serve in the U.S. House of Representatives.

In fact, Congressman Gibbs is the first member of Congress that is a past State Farm Bureau President.

Carroll County Farm Bureau President John Davis was one of those who met with Congressman Gibbs, but through redistricting Davis will have a new Congressman.

“The schedule was such we got to talk with both of them,” Davis said. “I’m impressed with the new guy, he’s got an agriculture background, very similar to what Bob has.”