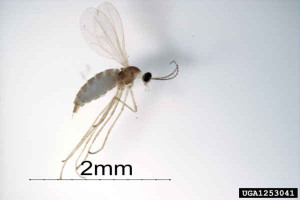 An invasive species new to Michigan could spread as far west as the Dakotas.

This fall, Michigan State University Extension’s Ben Phillips discovered swede midge on an organic farm in Sanilac County, in Michigan’s Thumb. He says the pest can cause 100 percent loss to cole crops.  “It made the plant so that they grew in a way that looked sort of healthy, but when it time to harvest a head broccoli or cauliflower, there was literally nothing there.”

He tells Brownfield there are no real effective controls for organic growers and conventional pest management strategies are limited. Phillips says New York, Massachusetts, Virginia and Ohio are also fighting the pest.  “Because of their generation time and there overlapping generations, they’re always coming out of the soil.”  He says, “These foliar applications are only going to get the fliers and the larvae that are there and not the ones that are coming out, so you have to stay on it.”

Phillips says growers have to spray every nine days to protect their crops.  “The swede midge somehow got from Ontario all the way over to Alberta in Canada as well where there’s large canola fields.”  He says brassicas like canola or oil seed radish used by sugarbeet growers can become hosts plants. Indiana, Illinois, Wisconsin and Minnesota could be next to find the pest.

Phillips says swede midge most likely is being spread through vegetable transplants. He suggests farmers use crop rotation as a preventative measure.