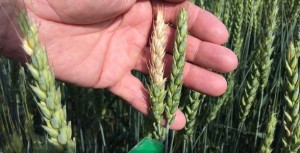 The damage to Missouri’s wheat crop is “unprecedented”, according to Bill Wiebold, University of Missouri crop specialist. Reports of vomitoxin in the state’s wheat are “everywhere.” Wayne Flanery, agronomy specialist with University of Missouri Extension in Holt County, tells Brownfield Ag News the problem started with stripe rust in wheat and the combination of issues is the worst he’s seen, “We’ve had scabby wheat occasionally every year but I think with both of those problems together, both the rust and this, it just complicates things.”

He says the wheat disease problems are taking a toll financially. “There’s considerable dockage and some elevators are not accepting wheat. So, it’s kind of a whole range of issues… test weights, how much the levels of DON are in the grain, just a whole host of issues.”  The vomitoxin fungus is also referred to as “DON.”

Flanery says wheat yields in Missouri vary:  Some wheat growers are getting 50 bushels to the acre and in other places they’re having to disc it under. Missouri is one of a number of states with similar wheat disease problems because of prolonged wet weather.