The debate continues to rage over the EPA’s proposed Waters of the U.S. (WOTUS) rule.

The latest development involves the release of EPA maps which critics say confirm that the agency is attempting to control land across the country.  Ashley McDonald of the National Cattlemen’s Beef Association calls it “the smoking gun for agriculture”.  McDonald says the maps show that EPA knew exactly what it was doing and knew exactly how expansive its proposal was before it was published. 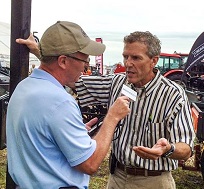 In a blog post, EPA spokesman Tom Reynolds disputes that notion, saying the law has nothing to do with land use or private property rights.

“The rule serves the needs of American agriculture by clarifying the jurisdictional reach of both the EPA and our state environmental partners,” says Brooks.  “So, simple is good. Clear is better.  The interaction you don’t have to have with the EPA or with the Army Corps, that’s the best interaction for a producer.  That’s where the proposed rule would take us.”

Brooks says the EPA is listening to agriculture’s concerns.

“I’d like to think that, if you take just some of the more heated rhetoric out that tends to boil up around the edges of this conversation, you can really see some basic principles there that look like they might provide a way forward for the rule.”

Brooks says the goal for the final rule is “clarity and workability”.